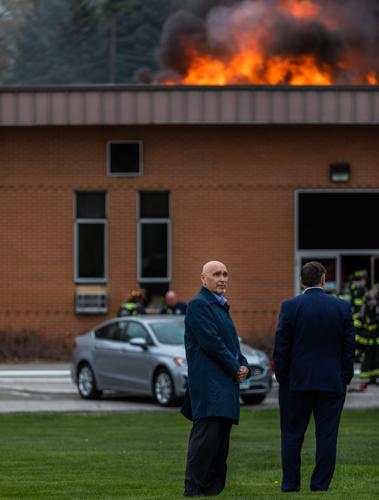 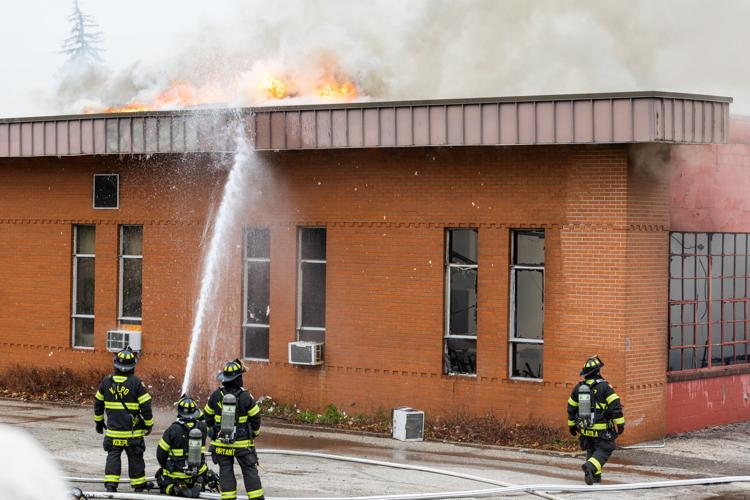 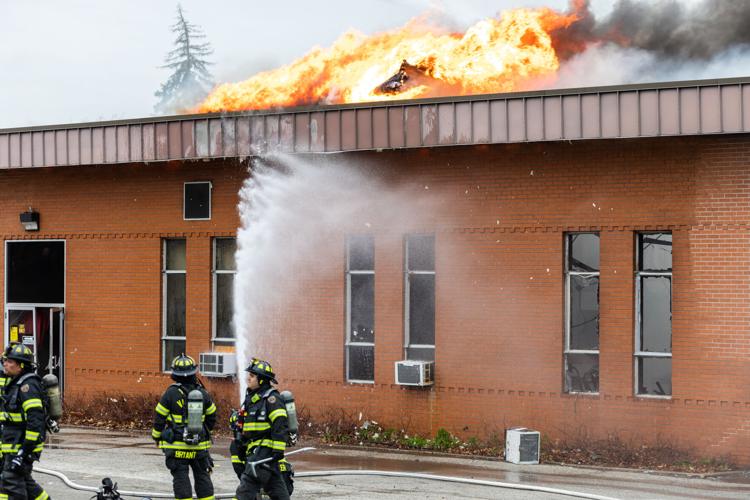 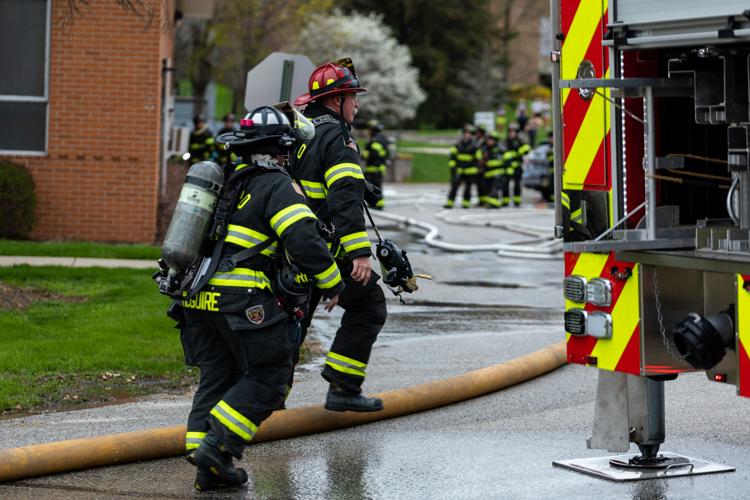 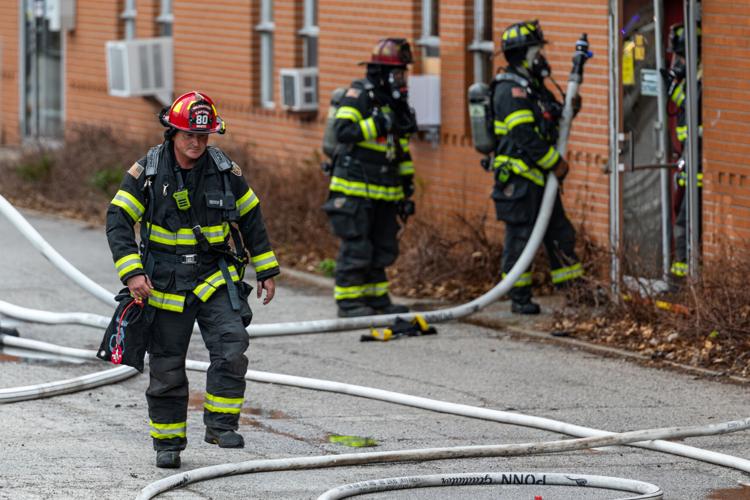 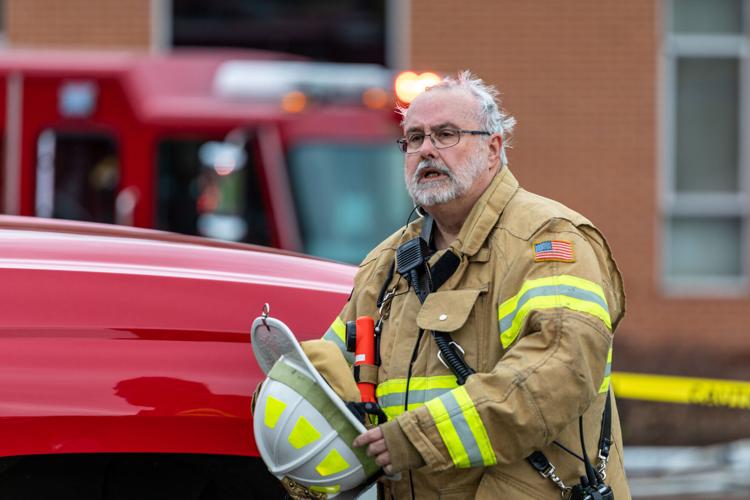 April 29, 4:31 p.m., a 911 call was made reporting the smell of smoke inside the Art-Psychology building located on the east side of campus. Fire Engine One of the Valparaiso Fire Department arrived on site and entered the building to confirm no one was inside.

“We smelled something [from Dickmeyer] and we didn’t think it seemed right, so we ran out and saw the smoke coming out of the windows of the art side of the building,” said Natalie Vernon, a Valpo student. “It didn’t seem like a lot of smoke and we ran in and started shouting to make sure there was no one in there. Then we called dispatch.”

The windows on the northern end of the building had shattered and the initial smoke that was spotted coming through the opening eventually turned into flames.

“The report of the fire came in approximately 4:30 p.m. on our dispatch. It was called in by an occupant on scene that saw smoke in the building. They called 911, VUPD was first on scene and they reported they saw flames in the building,” said Robert Schulte, Lieutenant of the Valparaiso Fire Department. “They immediately started putting water on the fire, we did a primary search of the building and found no occupants inside. Then we made an interior attack of the building and because of the changing smoke and more of the fire conditions in the ceiling and in the roof, the building became unstable. Our command had us evacuate the building.”

Water was also applied to the surrounding buildings, Dickmeyer Hall and Kroencke Hall, as a precautionary measure and in an effort to contain the fire to only Art-Psychology. Another factor that prevented firefighters from internally battling the fire was the compromised roof, discovered by drones. The fire continued and was fueled by paints, acetones, paint thinners and acetylene, common supplies for the Art program.

“After that, we mounted a defensive attack, where we have a couple aerials [fire trucks] up in the air trying to attack from the outside, as well as some master streams on the ground trying to shoot inside the building,” Schulte said.

4:47 p.m., VUPD sent out a campus-wide email confirming the report of a fire in the Art-Psychology building and instructing students, faculty, staff and community members to stay away from that area. The primary origin of the fire was located in the northeast corner of the building.

The fire departments of Valparaiso, Chesterton, Union Township, Morgan Township and Washington Township put forth a collective effort to extinguish the flames.

In the second hour of attempts to lessen the flames, the fire shifted from its consistent burn on the north side of the building to the south. Vehicles parked in Lot 42, next to the Art-Psychology building, were moved.

6:43 p.m., light rain began and hope among the gathering crowd increased that the fire would eventually cease. While no one was injured by the blaze, the Art-Psychology building had held historical significance to Valpo.

“After World War II, four-year engineering programs were reinstated on campus through the initiative of students who raised funds and then designed and built the new engineering laboratory building. It was dedicated in 1949 and the engineering programs remained on that site until 1968 when they moved to the newly constructed Gellersen Engineering and Mathematics Center,” said President Jose Padilla in a campus-wide email in response to the fire. “When the Art-Psychology building, initially the College of Engineering, was built, the sign outside stated, ‘Initiated by students; planned by students; built by students;’ let us remember these words, rise from the ashes, and give shape to the future of Valparaiso University’s campus.”

6:58 p.m., the heavy smoke cleared from inside the academic building, enough to see a fraction of the damage left from the fire and the high pressure water. Pieces of the ceiling were hanging down and a charred interior was what remained of the once lively spot. A second aerial fire truck began spraying water onto Art-Psychology.

While the cause of the fire is still being investigated, there has been no indication that the fire was set purposefully.

“They did the investigation. This is routine, the local fire inspector, the fire marshal and everything. It’s routine and everything checked out good,” Garber said. “There’s no foul play.”

Approaching the third full hour, VUPD sent out another campus-wide email, dissuading individuals from nearing the site due to smoke. Grim emotions were seen in the forms of frustrated phone calls, tears, staring in disbelief and supportive embraces.

“It is an old, well-loved building, and it is our home, not just to me but to decades of amazing students, conversations and artistic discoveries. Our students and faculty hosted countless exhibitions, Lighter Coffeehouses and Soup Bowl for the Hungry fundraisers in the space. Our students knew it best, loved it and I’m proud of the work they made there. We have amazing art students, and thankfully, some of our seniors’ work was already on display across campus as part of their thesis exhibition Art Walk. While our building burned, our community came together to celebrate what we do best — create,” said Sarah Jantzi in Padilla’s email.

“It’s all precautionary because no matter how air tight a building is, it will get smoke in it. So that’s why everything around there [Art-Psychology] was closed,” Garber said.

Kroencke Hall later reopened on May 3 at 8 a.m. Class locations for the fall 2022 semester were addressed in an email on May 2. The Center for the Arts (VUCA) has been turned to as the leading solution.

“The Department of Communication and Visual Arts was already developing plans for renovating some spaces in the [VUCA] to accommodate painting and drawing. Between the Provost and the Dean’s Office in Arts and Sciences, we are looking at funding options to complete the necessary renovations this summer that will allow the relaunch of painting and drawing in the VUCA this fall. We hope to have more details about this work in the coming weeks. Rest assured that we will find a way to offer classes in painting and drawing this coming fall. Similarly, we are working on plans to reestablish the animal laboratory in support of the Psychology program,” said Dean Jon Kilpinen and Professor Laine Steinwart in an email.

The May 4 Chapel Break was dedicated as a service of remembrance and thanksgiving for the Art-Psychology building. Those in need of support are encouraged to seek out the University Counseling Center, TAO Connect and the Chapel pastors.

“We just pray to God that nobody was hurt and that we’ll heal from this, but you know it’s like we’ve lost a part of ourselves tonight. We’ll gather together and regain it and go on and heal from this,” Padilla said.