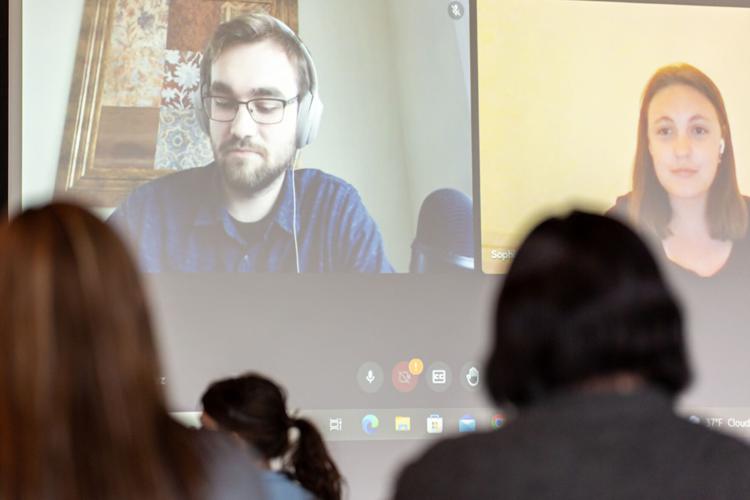 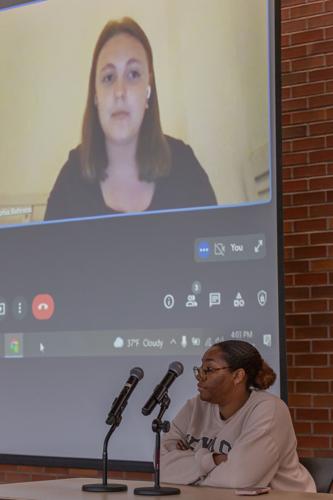 The debate, hosted by The Torch and VUTV, was held in the Christopher Center Library’s Community Room and was accessible in-person and via a YouTube livestream. Intending to get candidates to express their response to timely campus issues, the debate covered an array of subjects. Most notably, candidates were asked about their method for implementing the new bylaws and constitution recently passed by Student Senate.

“You’ve both (Behrens and Chenoweth) been off campus and away from Student Senate for this past semester. Some of your comments do sound a little out of connection with Senate, maybe even a little biased against some of the really hard work we’ve been doing this semester. So how would you propose to reconnect with our constituents–who are really important–and your fellow senators, especially if you’re making comments that are kind of negative about something we’ve been working really hard on,” one audience member said.

The audience question pointed to concerns over Chenoweth’s and Behrens’ time spent abroad and their ability to understand the intentions of a number of the passed bylaws. Chenoweth responded with his plans for next year.

“I think this next year is going to be critical in the transition period to the new bylaws and the new system. I have been fortunate enough to speak with some of the student organizations and students on campus about some of the ways this new system may be affecting their organizations. One of the most important things to do for making sure this process goes as smoothly as possible is to actively seek out feedback from those that are directly affected by the processes and be able to change things that aren’t working as originally intended,” Chenoweth said.

Behrens commented on objectives and plans for growth with the bylaws during the 2022-2023 academic year.

“I too am incredibly proud of the work Student Senate has done because I was there last semester as well and sat in on the executive committee for a lot of the preliminary process, and I’m aware of how much work you guys [the senators] have done,” Behrens said. “You guys have focused so much on these little details of the legislation, which is hard, and it’s hard because I know you guys have thought about every single word. However, when focusing on my campaign for next year, I want to focus on building on the work you have done because you’re so focused on this internal work, and next year we actually get to take the internal work you’ve done and expand on it.”

Although Howard was the only candidate to be a rising junior rather than a senior, she turned to campus experiences that inspired her campaign initiatives.

“Number one being diversity, equity and inclusion. Being a Black woman here on campus, I know what it’s like to be a minority and to be one of the only students that looks like you. So my biggest thing is continuing to do the work I’ve already done with my committee (Diversity, Equity and Inclusion Committee for Student Senate) and coming up with solutions that’ll make campus a better place for diverse and minority students. My second thing is safety. I’m also an RA (Residential Assistant) in GM (Guild-Memorial Hall),” Howard said. “My biggest thing is to create a space where students can come and discuss the safety issues they have and also figuring out if there’s a way to install cameras in residence halls so that we can see if that decreases crime that happens within the halls. My third thing is transparency and communication–specifically amongst faculty and staff.”

The four primary campaigns Behrens advocated for were communication; diversity, equity and inclusion; involvement within student organizations and safety and accessibility. Ultimately, Behrens sought out social media as an avenue for providing transparency to the student body. She looks to implement changes by increasing public attendance at Student Senate meetings and vice versa.

“Streamlining that communication between administration and students so they [the students] aren’t taken by surprise and inviting students directly to our meetings and also going to theirs. We need to see how their meetings run and see how these bylaws affect their day to day operations,” Behrens said.

“My main job as the Vice President would be to work with the President so that they don’t have to worry about the day to day internal things and they can focus on all of the fantastic campaign things they’ve pledged to get done externally,” Chenoweth said.

Behrens and Chenoweth were running mates during the campaigning period, however, they had the potential to be elected without one another. Howard still expressed her ideas for working closely with Chenoweth if Behrens wasn’t elected.

“I see it being like a partnership with running Student Senate. There’s things I’m going to have to do as President and things Ian specifically has to do as Vice President, but understanding that there’s going to be times where we overlap and figuring out the best way to communicate that discuss that and plan that out. I think we both have similar ideas on things and he has experience he can bring to Senate, but I also have experience I can bring to combine,” Howard said.

The electronic polls opened at 8 A.M. on April 20 and closed at 5 P.M. Ballots were available for current first, second and third year students. With a total of 473 votes cast, Behrens came out victorious and claimed the title of Student Body President. Chenoweth was elected as the Student Body Vice President.