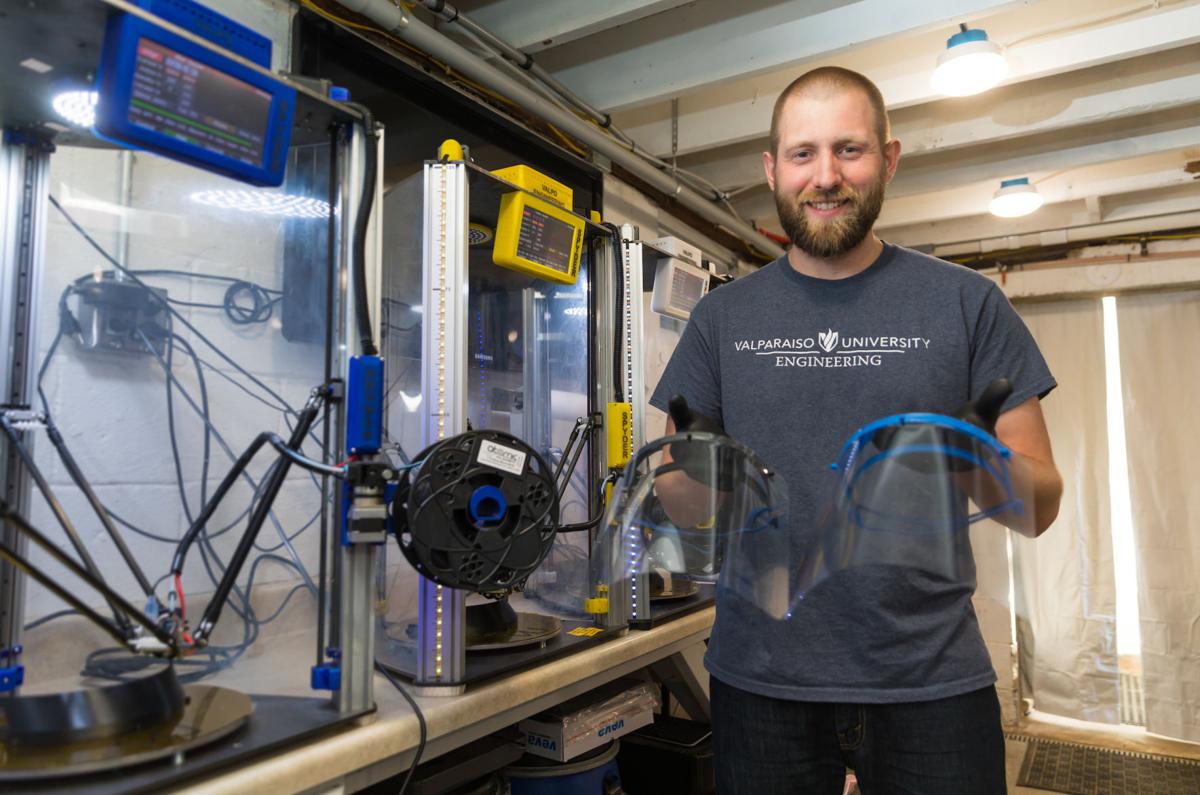 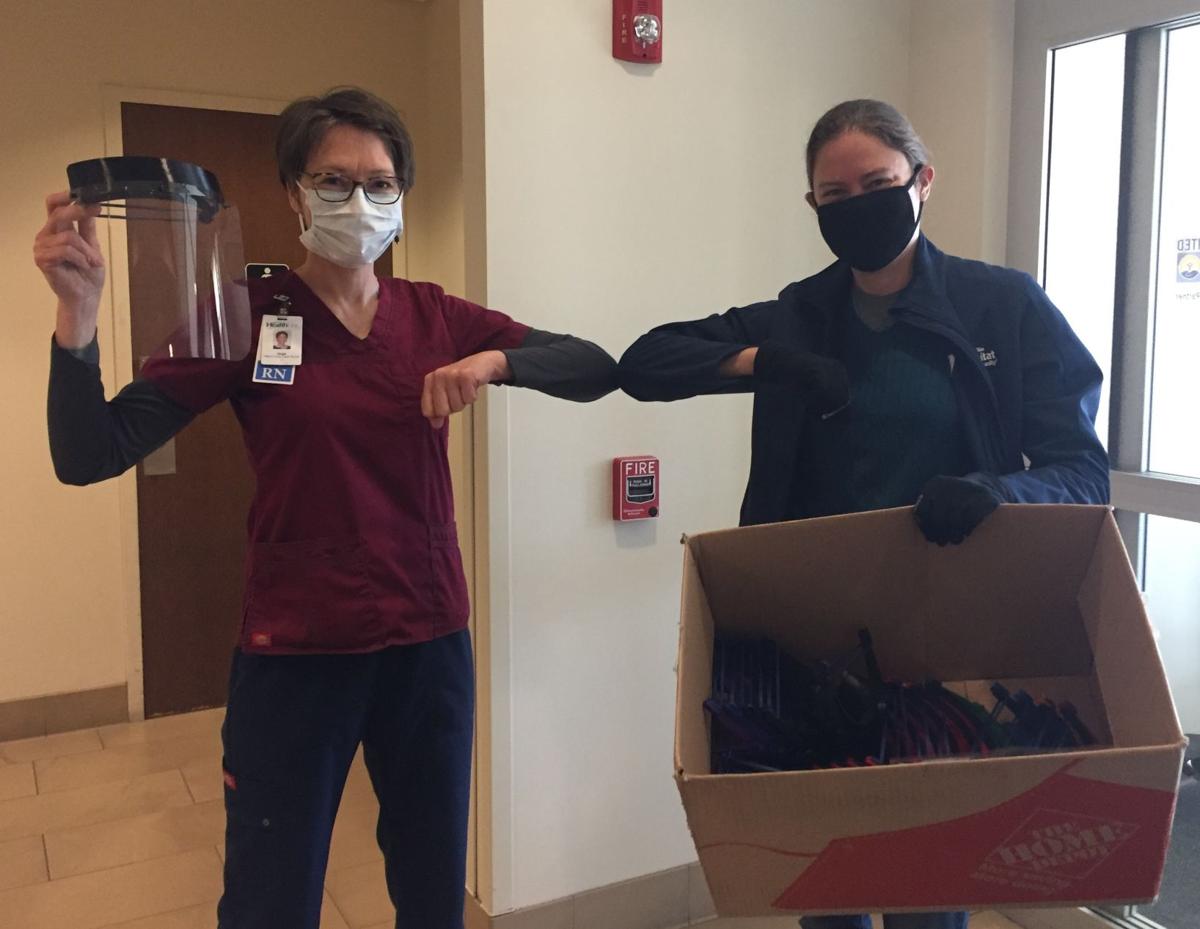 Professor Elizabeth Wuerffel, associate professor of art, reached out to Professor Daniel Blood about printing 3D print face shields as she had been contacted by someone who works in a hospital that needed one. Wuerffel (right) is making a delivery to HealthLinc in Valparaiso 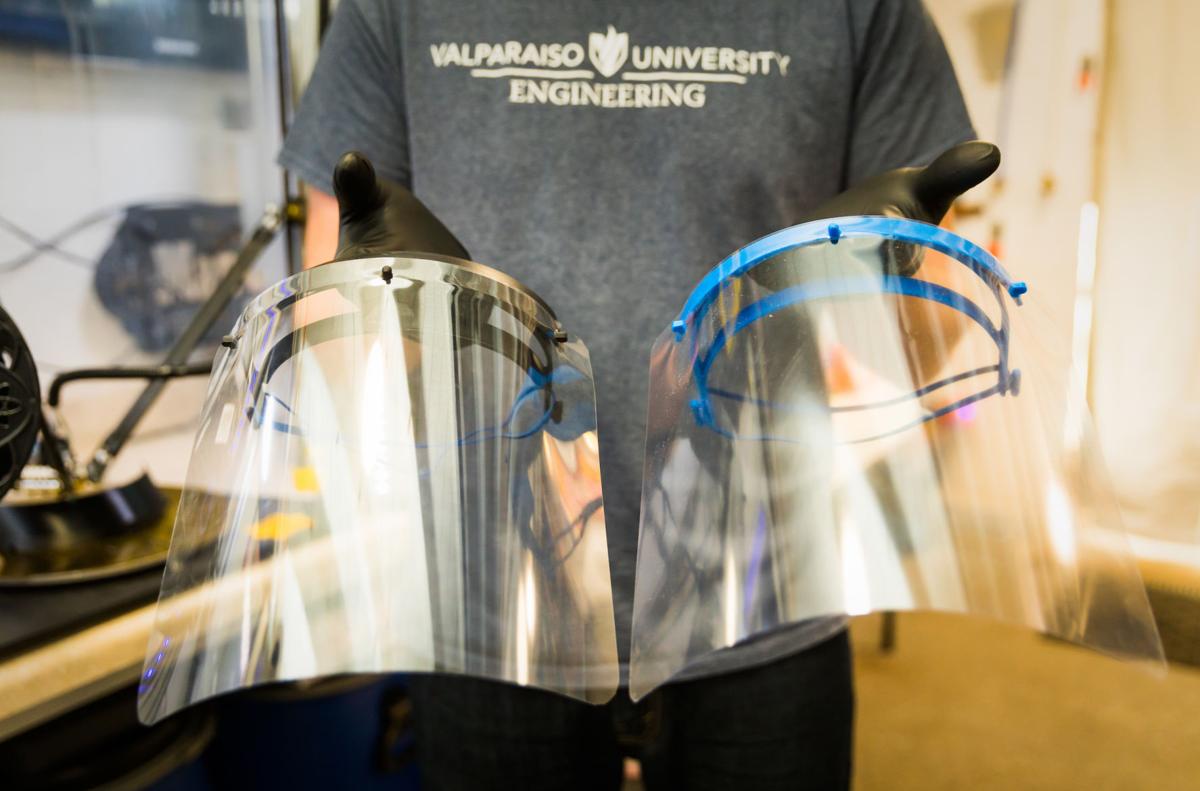 Professor Elizabeth Wuerffel, associate professor of art, reached out to Professor Daniel Blood about printing 3D print face shields as she had been contacted by someone who works in a hospital that needed one. Wuerffel (right) is making a delivery to HealthLinc in Valparaiso

Assistant Professor of Mechanical Engineering Daniel Blood has been working to 3D print face shields for medical professionals in the Northwest Indiana area.

Elizabeth Wuerffel, associate professor of art, reached out to Blood over a week ago to see if he could 3D print face shields as she had been contacted by someone who works in a hospital that needed one.

“I had been monitoring the situation a little bit and the National institute of Health, the NIH, had recently approved a design and since they had approved that I thought I would be comfortable with us going forward and making it. So they approved it on Friday and by Monday we had our printers set up printing them,” Blood said.

“So it started off with that hospital and we had a couple small requests and then I made a post on the accelerated 3D printing lab Facebook page and to be honest I thought I would get like 15 views, I was just letting people know what we were doing,” Blood said. “We’ve had something like 17,000 views so a little more than I thought it was going to be and because of that it’s actually been the way we reach most of the people that have requested the masks or the face shields.”

As of today, they have received 906 orders and have fulfilled about 430 of them.

“We’ve already been able to deliver a decent number and it’s gone to a whole bunch of different places. There’s probably 33 different locations on our list right now,” Blood said.

They begin making the shields by downloading the NIH file and sending it to another program which gives the printer instructions on how to make the shields.

“It’s kind of like how you come up with the recipe if you were trying to cook food, it’s the same kind of idea. It decides how much filament, where to put it, how to put it down,” Blood said.

“In general, a 3D printer works by being fed spools of thin plastic filament. The filament is fed into the printer at a high temperature, melting the plastic and then using a computer controlled nozzle to precisely place each layer of plastic building up vertically layer by layer,” Luft said.

The first part that’s printed is the visor.

“So you have this 3D printed visor, this is all made out of PETD. It’s a good plastic for being able to flex, it’s what we use in the College of Engineering and so our printers thankfully are set up for this and this is the preferred filament type. And so you print this and it has a nice visor on here so let’s say someone sneezes on the medical professional or first responder so it’s more likely to go around them rather than getting in their face,” Blood said.

They then use clear plastic binder covers that have been three hole punched as the shields which they attach to pegs on the visor.

Blood makes sure to take precautions while making the shields to keep medical professionals from getting sick.

“Luckily we have enough alcohol within the College of Engineering for sanitizing, disinfecting the shields before we send them off to these places even though none of us are sick and we’ve been quarantining ourselves specifically for this project you always want to be on the safe side just in case something happens,” Blood said.

They also use gloves when handling the shields and encourage medical professionals to sanitize them when they receive them, as they deliver the supplies directly.

Blood has now optimized the process of making the shields.

“It used to take five hours to print it, now we’re down to about two hours. Some of our printers can even make it in about an hour, the ones that are set for more of the high speed printing,” Blood said.

He feels that the masks are being printed quickly because the printers they are using are reliable.

“The printers that we have are almost all custom built here at Valpo and those run 24/7 pretty much anyways with the engineering students using them so they’re pretty much already used to running that much so reliability has been kind of nice,” Blood said.

“We’re kind of lucky that we already had the equipment to make a decent number on campus because there are pretty much sold out of 3D printing supplies everywhere right now, there’s not a whole lot you can find unfortunately,” Blood said. “So it’s been a little bit slim pickings but it’s been impressive the response that people have had of trying to help out.”

The hardest supply to get has been the 3D paper filament, which is the plastic that goes in the printer, and that has to be sourced from many different places.

Despite this, he feels that the design will be able to withstand supply shortages as it is flexible.

“So even if we can’t get rubber bands, they can always use what they call coban or coflex which is the flexible stuff you use sometimes when you’re wrapping a wound. They can use that or if they have rubber bands they can use them,” Blood said.

He is thankful for the support of the Valpo community to allow them to make these shields.

“Valpo put together a fundraiser page for us and Liz Wuerffel placed it on her Facebook page and we ended up having almost 200 donations in a single day so the blessing has been that that’s been able to help us work. It allows us to focus more on the production side and not on trying to minimize the cost as much,” Blood said.

He believes the demand is outpacing the ability of those trying to produce the masks and shields.

“I’m guessing there’s a good chunk of the medical professionals in this region that can’t reliably get access to things like masks or shields," Blood said. "So a lot of them will have to wear those masks for either the full day, which it’s pretty useless by the time it hits the end of the day as it gets saturated from the moisture from your breath, or they have to wear them for multiple days which is even worse.”

While N95 masks work better, these shields help to protect the medical professionals from aerosol in the air.

He added that healthcare workers have been very appreciative of his efforts and that he’s heard pretty heartbreaking stories of what they’ve had to deal with during this pandemic.

“If we can do anything at all to help out these medical professionals and first responders then we should absolutely be doing that because they’re kicking butt right now,” Blood said.

Blood was inspired to help as his brother is a family physician and due to his work in Haiti.

Students in the College of Engineering support Blood’s efforts in making the face shields.

Engineering student Kallie Lyon stated that the College of Engineering’s website claims that students who will learn how the world works but also learn how to help make the world a better place.

“I think it's important that Valpo is 3D printing masks because it shows how the college of engineering puts that mission statement into action. Valpo engineers take classes about ethics in engineering, but that passion for helping others extends outside the classroom, too,” Lyon said.

Luft also supported Blood’s efforts as Valpo is utilizing it’s skills and resources to contribute during the pandemic to do something that helps the medical community.

“With classes being remote until the end of the semester, these printers would be sitting idle for months anyways,” Luft said.

Blood plans to continue making the masks as long as possible.

“We’re going to make as many as we can. So if this thing goes on for two months, we’ll keep producing for the next two months,” Blood said.

However, he’s hoping that large manufacturing companies will eventually be able to make masks on a grand scale for hospitals so that he can focus on providing them to smaller places, such as dental offices.