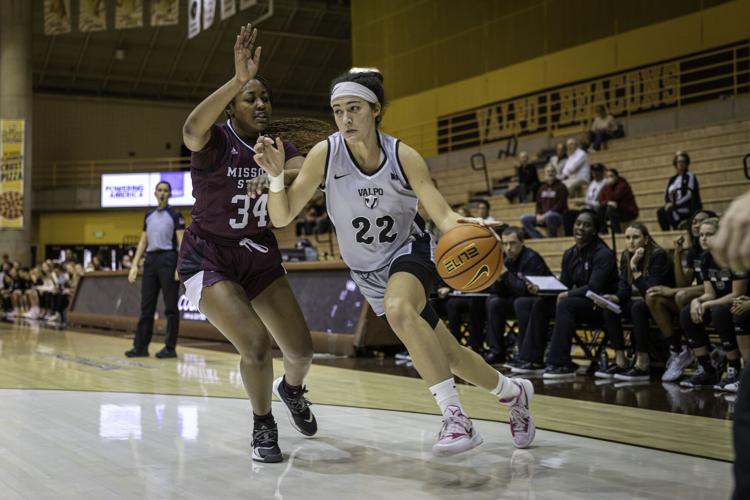 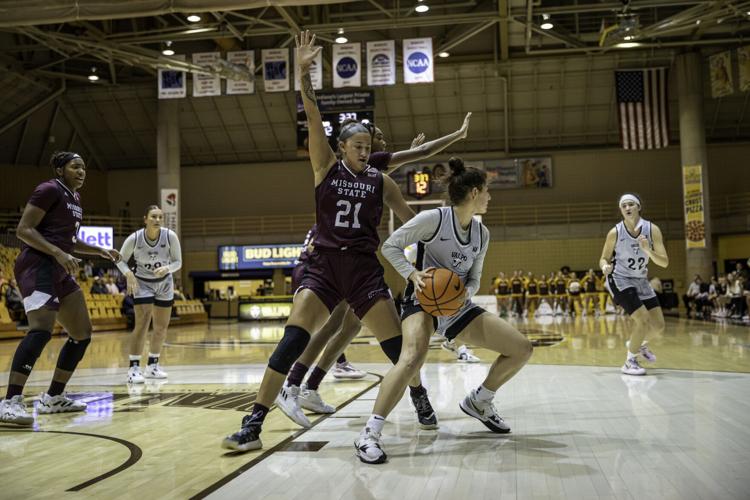 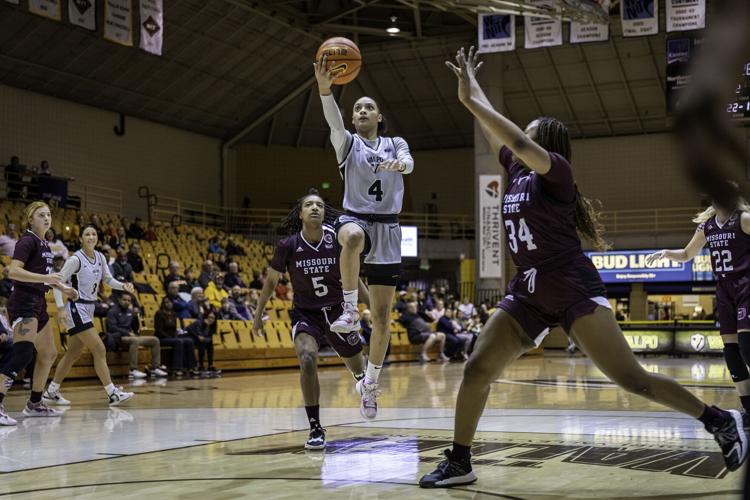 If you weren’t at the Athletics-Recreation Center (ARC) on Jan. 14 to watch Valpo women’s basketball take on Missouri State, you missed out. The Beacons earned their first ever win over the Bears and their first Missouri Valley Conference (MVC) win of the season in a 77-68 victory on their home court.

“We’ve been working really hard in practice and we haven’t been getting the outcomes we want. For the last several games we know that we’ve been right there. We just have been craving a win so badly, especially with the sour taste in our mouth from earlier this week [a 51-50 loss to UIC]. We’re just really excited and really happy and really having a lot of fun out there. This game was a ton of fun,” said junior guard/forward Leah Earnest.

When the game clock expired, Valpo’s players gathered near center-court, celebrating the win and hyping up the crowd before running to the locker room and sharing high-fives on the way out.

“It feels great to win. We haven’t won in a while so just getting that out of our systems and knowing that we can turn around and win a game this upcoming week too would be really nice,” fifth year guard Ilysse Pitts said.

Valpo entered the matchup as heavy underdogs, facing a Missouri State team that entered the game sitting in second place in the conference and boasting a 9-5 overall record. On the season, the Beacons are 2-11 and found themselves on an 11-game losing streak as they prepared to take on the Bears.

Much to the team’s credit, they haven’t let their recent struggles derail them, and that was evident against Missouri State as the Beacons played some of their best basketball of the season.

With just over four minutes left in the fourth quarter, Pitts came up with a block on a Missouri State three-point attempt. Pitts was unable to convert the ensuing fast-break layup, but Earnest trailed behind her teammate and tipped in the rebound while being fouled on the shot. Earnest converted the free-throw to complete the three-point play that brought everyone in the ARC to their feet and gave the Beacons a 70-64 lead.

“I was pretty excited that the first one [of those put-backs] I’ve ever gotten to convert in a game was one in a big moment like that and an and-one. I know those fast-break layups seem like they can be cake sometimes and I trust [Pitts] 100% to make that but I figured I would get down there just in case and it happened to work out,” Earnest said. “I was just trying to make a hustle play and it paid off and then that kind of gave us a lot of momentum. I tried to ride that momentum and distribute it to my teammates.”

Earnest finished 6-of-9 from the field, went a perfect 6-for-6 from the foul line and grabbed a career-best three steals. The junior put up 18 points, marking her 11th double-figure scoring night of the season.

As time wound down, the energy in the arena was palpable. In an effort to make a comeback, Missouri State started fouling to send the Beacons to the free-throw line. Unfortunately for them, Pitts went 8-10 from the foul line in the final minutes to seal the deal.

“Making the free-throw, that’s literally the only thing that I was focused on. #5 [Aniya Thomas] was talking to me a little bit, trying to distract me but it was nothing,” Pitts said.

Pitts finished with a career-high 24 points, more than double her previous mark. She also added on seven rebounds, three steals and two assists. Her seven made field goals and eight free-throws made were also career-best marks.

Out of all the scoring Pitts did on the night, the most critical basket came on a three-point shot with 7:19 left in the game that broke a 62-62 tie and gave her team crucial momentum down the stretch. Still, the only thing on Pitts’ mind after the shot was taking care of business on the other end of the floor.

“All the coaches have been telling me to be confident with the ball, shoot the ball. So that’s what I did this game and it benefitted and paid off,” Pitts said.

Another impressive performance on the stat sheet came from senior guard Olivia Brown, who scored 15 points, notched four assists and went 6-of-7 from the foul line.

Brown’s play was especially crucial early, as the Beacons fought to keep pace with the Bears who led through most of the first half.

Brown converted an and-one after being fouled on a layup to keep her team within three points of the Bears. With 45 seconds left in the first half, Brown scored on a hook shot to make the score 39-35 in favor of Missouri State.

While undersized compared to an athletic Missouri State team, the Beacons didn’t hesitate to drive to the basket and play physical basketball. Valpo out-rebounded the Bears 28-23 and got to the foul line 22 times in the game.

“I thought we ran our offense probably the best we’ve run it in a long time. We used screens, we got to multiple screening actions, we were hitting screens and forcing [Missouri State] to switch. You know, we were able to get some matchups that we liked and in those matchups we were able to find space and drive into space,” head coach Mary Evans said. “I think the thing we did best tonight is we didn’t settle to take tough shots at the rim, we shared the basketball and got second or even third drives. I think when we’re doing that, we’re a pretty darn good basketball team.”

Another key to the game for Valpo was their play on the defensive end of the court. The team secured four steals in the first three minutes of the game, and finished with 11 total steals on the night.

“About a month ago we decided to tweak our defense a little bit to try to make it fit this group of people a little bit better. [The players] have been very open-minded, first and foremost, to change it and they’ve been very disciplined in learning what we want to do,” Evans said.

Next up, Valpo will head to Northern Iowa in their first of three-straight away games. But before they head back into action, the team will take time to enjoy their hard-earned win.