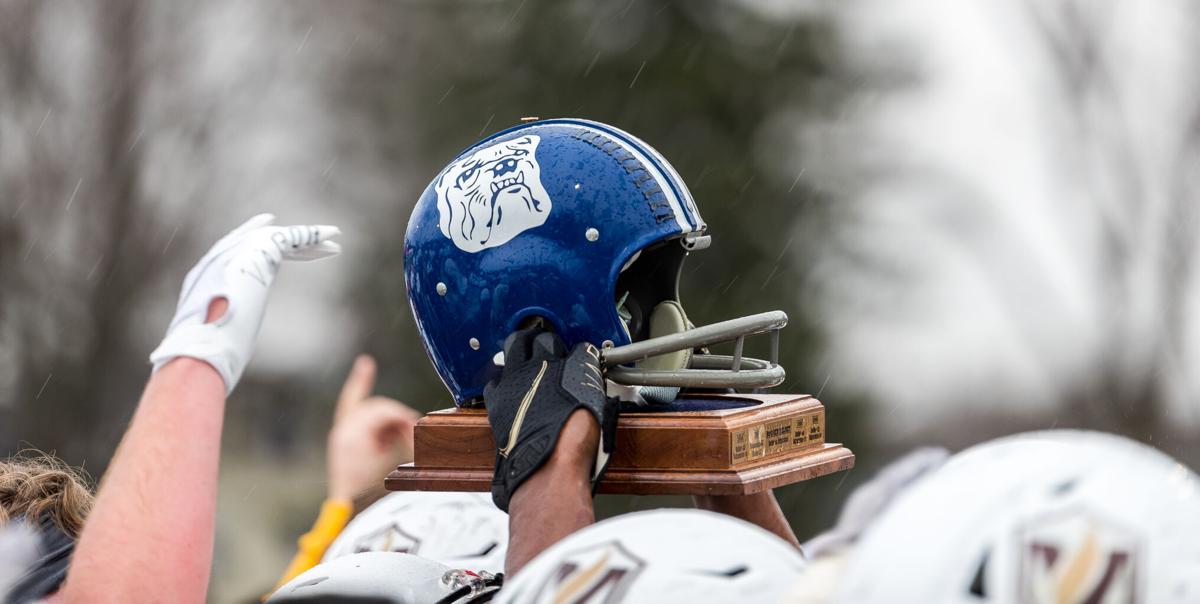 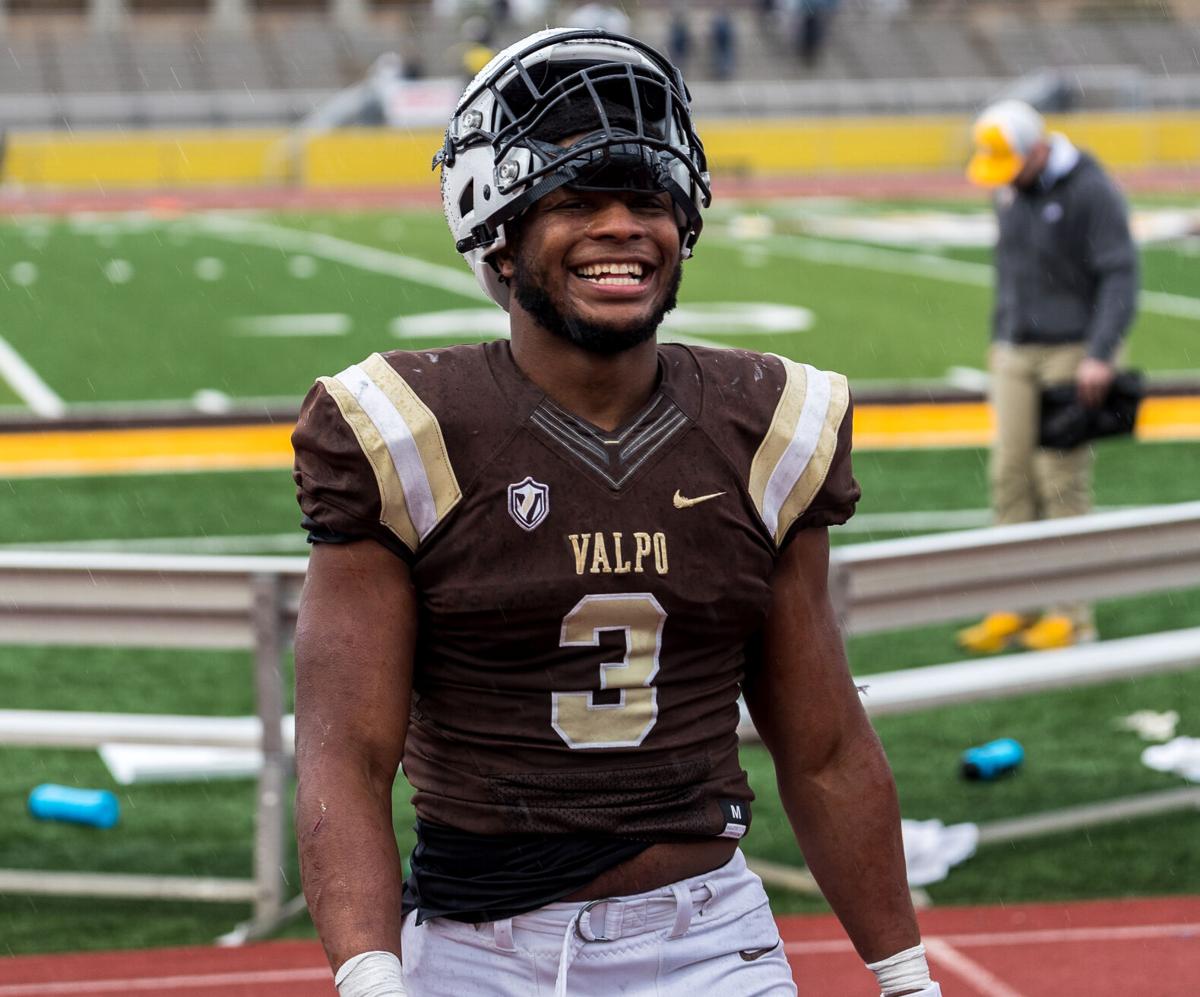 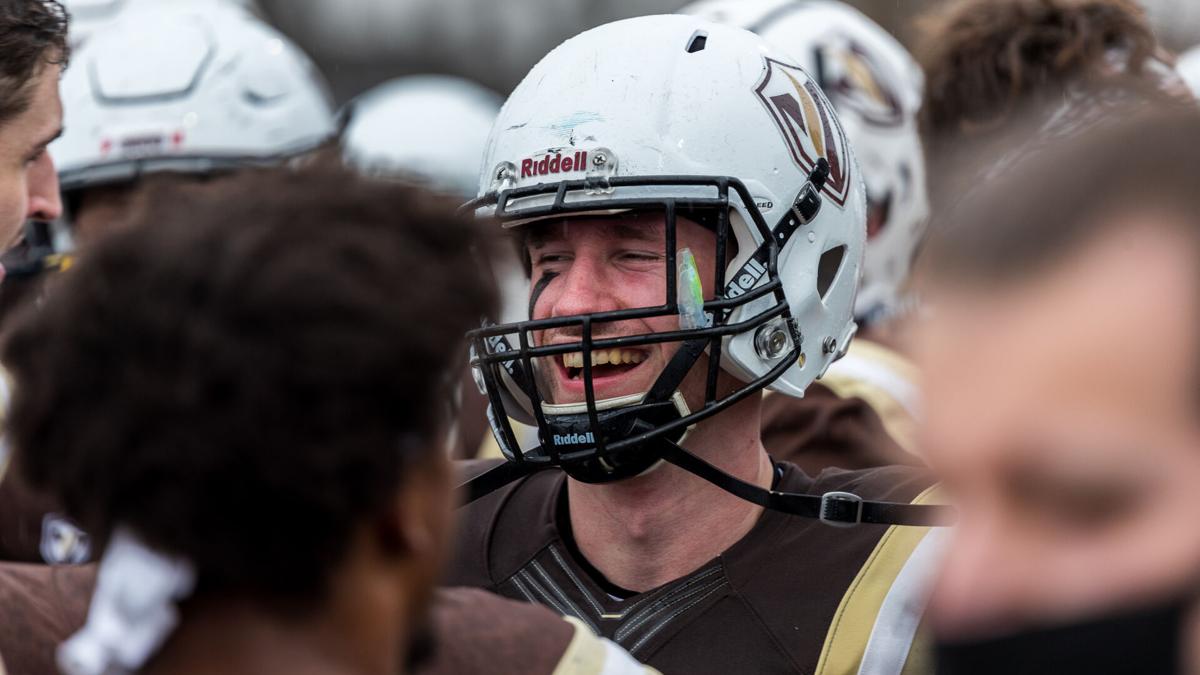 It is not often that a Pioneer League Football team beats Butler twice in one season. However, Valpo achieved this feat during a rainy fourth quarter 28-25.

After taking the victory formation to wind down the clock, players stormed toward the stands with the Hoosier Helmet.

The team celebrated with the limited fans seated in the stands of Brown Field. Defeating Butler twice in one season was a first for the Brown and Gold in their program history.

“That was something we talked about all week: 60 minutes is a short period of time for a lifetime of memories,” Head Coach Landon Fox said.

After ending the third quarter down 17-14, Valpo answered back in the fourth quarter with two touchdowns.

“All of my receivers did a great job just setting the blocks,” Washington said.

Smart defense allowed more opportunities for Valpo to score later in the quarter. Freshman defensive back Keyon Turner started the momentum for the next touchdown.

After Turner picked off Butler’s quarterback, Sam Brown, he returned the ball for 12 yards and was stopped on the one yard line.

Washington would then run up the middle to extend the score to 28-17 one play later.

The running back ran for 120 yards through 26 touches on the game. He contributed three of Valpo’s touchdowns, two rushing and one receiving touchdown.

Duncan felt nostalgia upon celebrating with his former teammates and alumni. These moments were what Duncan came back for in his fifth season.

“I am now 4-2 against Butler, so that is just a great feeling to be able to do that,” Duncan said. “It’s a great experience, great rivalry that it was fun to be part of.”

Duncan passed the 4,000 passing yard landmark in his career. He made seven of his passes for 102 yards and threw in one touchdown.

Duncan and Washington both were combined for 204 of Valpo’s 220 total rushing yards.

“He is a great running back and just a great guy in general,” Duncan said. “I build off him, he builds off me. It’s great to have him back.”

As the team prepares for Drake, Fox commented about the level of execution that will be needed against Drake. Valpo’s only loss this season was against Drake at home.

“I am excited about next week,” Fox said. “It’s a team we haven’t beaten in a while. We aren’t going to shy away from that, but the goal is to go out there and take care of business.”

Valpo will look to improve their record to 3-1. The Brown and Gold will face Drake in Des Moines on Saturday, April 3. Game kicks off at 1p.m.