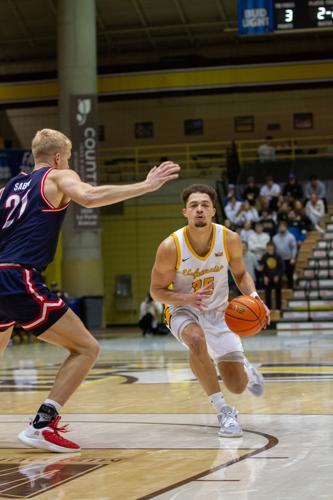 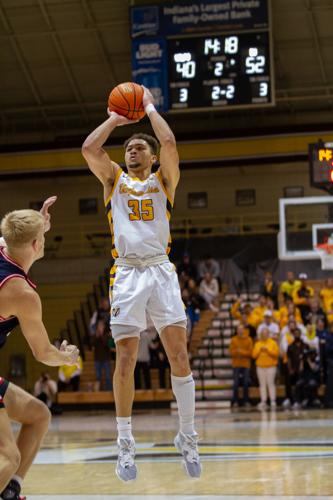 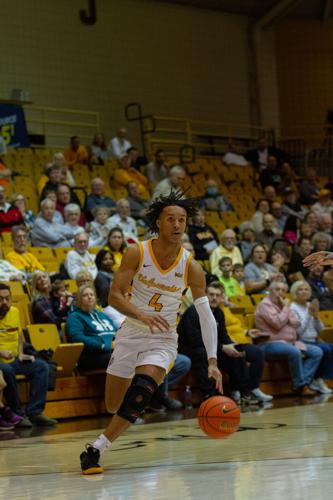 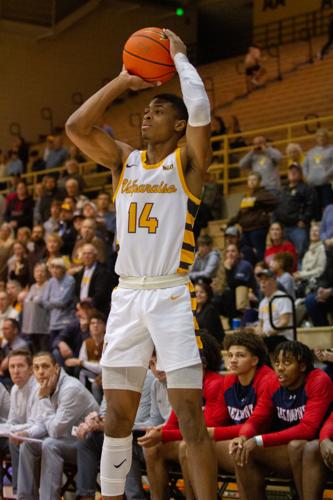 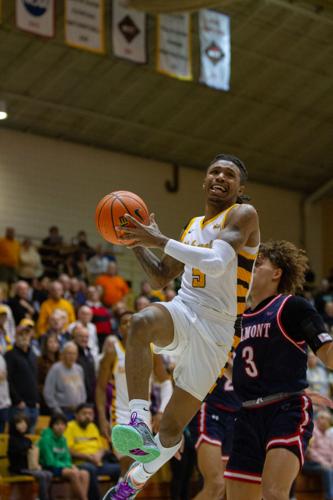 On Jan. 10, Valpo Men’s Basketball’s struggles continued as the team fell to Belmont 74-59. The loss was the team’s fifth straight and moved them to 0-7 in Missouri Valley Conference (MVC) play.

“We talked to the guys in [the locker room], talked a little bit about some of our details. There’s some stuff we’ve got to sharpen up,” said head coach Matt Lottich. “That small attention to detail and things like that are hurting us a little bit right now. Especially against a team like Belmont. With the pace that they have and the skill that they have, they’re going to make you pay if you’re not airtight.”

Aside from the loss, the team suffered another setback against the Bruins. Sophomore guard Darius DeAveiro subbed in early in the first half but was later carried off the court following an awkward landing. DeAveiro has missed action this season due to a left knee injury.

Head coach Matt Lottich and his team felt the weight of DeAveiro’s injury and hope he can return to the court soon.

“Obviously, I think it was a little emotional when [DeAveiro] went down. I mean, that was tough because you know the young man had been dealing with something and you see it [the injury] again. I have no update on him but I know that he had been battling really hard to get back on the court and then to see that happen was tough. So, I don’t know if that affected us,” Lottich said.

Valpo came out of the gates strong, playing up-tempo and trading leads with the Bruins. Freshman forward Maximus Nelson hit a three-pointer to give Valpo a 17-15 lead at the 11:25 mark in the first half. That would be the last lead the Beacons would see for the remainder of the game.

After Nelson’s three-pointer, Belmont went on a 17-0 scoring run over the course of five minutes and 12 seconds that was good for a 32-17 lead. Fifth year guard Kobe King was able to end the Valpo scoring drought of nearly six minutes with two made free throws.

With time ticking down in the first half, King found freshman forward Ibra Bayu who slammed an electric dunk that brought the crowd to their feet and Valpo within six points of the Bruins. The Beacons entered half time trailing 38-30.

“I thought that we were playing excellent basketball for a stretch there in the first half. We actually got them [Belmont] to have to massively substitute,” Lottich said.

Despite starting the half strong thanks to a quick three-pointer from sixth year guard Quinton Green, Valpo’s offense struggled to keep up with the Bruins. The Beacons found themselves down by as many as 16 points in the second half. Valpo was unable to come any closer than 12 points of the Bruins’ lead in the remainder of the half.

A bright moment in a rough outing came when King scored his 1000th career point. The fifth year reached the milestone on a layup with 13:41 on the clock in the second half. King joins senior forward Ben Krikke and graduate assistant Tevonn Walker as the third person currently involved in the program to reach the 1000-point mark.

“[The accomplishment] means a lot, that’s all the years of playing basketball since you’re a little kid. To have my teammates out here with me being able to do it, I mean, it’s been quite a journey for me also, going to Wisconsin and I didn’t know if I’d get back into college. For these guys to take a chance on me, bring me in, just welcome me with open arms and allow me to reach that milestone, I'm forever grateful,” King said. “Again, it’s just years of years of working. It’s definitely a team game but there are some things that are good to get out of your individual effort so it’s a great thing.”

King finished the game leading all scorers with 21 points. Fifth year guard Nick Edwards had a game-high nine assists to go along with eight points and four rebounds. Edwards logged 35:11 of playing time against the Bruins and with DeAveiro out again for an unknown period of time, Edwards’ workload is likely to increase even further over the course of the season.

“For me, right now, it doesn’t really matter about the minutes [played], it’s just when I’m out there I’ve gotta be locked in defensively. Like [Lottich] said, just the attention to detail. I know myself, I mean I’m not taking the blame for the loss but I just have to be better as a point guard. Especially since [DeAveiro] is down right now again I just have to amp it up a lot more for us to get a win,” Edwards said.

While the result is another setback in a string of conference losses for the Beacons, Lottich still holds out hope for the season and is proud of how his players continue to work.

“There were some bright spots, but overall the attention to detail has to sharpen up and once that happens, our margin for error right now is pretty thin. Again, the spirit is pretty strong with these guys which is exciting,” Lottich said.

The team’s continued spirit over the course of a tough conference season so far paid off in big ways on Jan. 14. The Beacons traveled south to take on Evansville, coming away with a 76-69 victory to secure their first MVC win of the year.

Looking ahead, the team will likely have an opportunity to make headway in conference action through the end of the month. Their next three games come against teams who currently sit in the bottom half of the conference standing - Northern Iowa, Evansville and Missouri State. A strong push through these matchups could put the team in a position to make a late run in the back end of MVC play.